Browse: Home / Uncovering the History of the First Standard

Standardization derives from the need to create a community that enhances not only the needs of an individual, but all other contributing members. While standardization bodies have been around for over a century, the process of standardizing techniques for industry has been going on even before the dawn of human species. The earliest known technological industry was the Oldowan Industry, which was widely standardized by early species of Homo such as H. habilis and H. ergaster. As such, it was the very first standard to ever exist.

The First Standard: The Oldowan Industry

The Oldowan Industry (named after the location of its discovery in Tanzania) initially appeared at the beginning of the Stone Age, approximately 2.6 million years ago. This technology is recognized for making use of the first stone tools, which ultimately played a key role in the use of tools for the following millions of years. The main component of the Oldowan toolkit is a core, which is a large stone that acted as the primary resource for creating the tools. The core was struck by a hammerstone in a downward motion, which would fracture it, creating stone flakes or choppers, in a process that has been confirmed through archaeological evidence of the fracture marks left on the cores. One of the main purposes of these flakes and choppers was to cut flesh off bone to prepare meals.

What Makes the Oldowan Industry a Standard?

So how exactly is this evidence of the first standardized practices? Remnants of Oldowan tools have been discovered by researchers all throughout Africa, Europe, and Asia, and they were used in specific sites in globally distant modern South Africa, China, and Spain. These practices developed from the same source, since they correlate with the movements of human ancestors from Africa into Europe and Asia. As these practices were passed down, human ancestors throughout the world would have decided (without the use of language) that it was the best method for them to utilize.

The Oldowan Industry was the standard for toolmaking until better techniques could craft more advanced technology. This occurred 1.8 million years ago, once the Acheulian Industry, which is characterized by bifaced blades and handaxes, became the standard.

Brad Kelechava is the senior manager of online marketing at the American National Standards Institute (ANSI).

This article first appeared on the ANSI blog and is published here with permission. 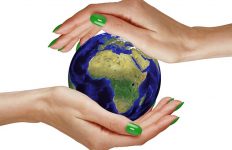